We had a three day weekend coming up, and I had just bought a dehydrator, and been busy drying up a storm of food, so it made sense to go away for a couple days and eat it all. Makes sense right?

It took us nearly a whole day of planing and organizing and finding stuff, before we were able to roll out, but we did it!

Our bikes were big and heavy….. 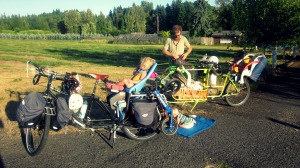 and it took us three hours to go the distance normally covered by bike in 1 1/2. But we got there!

Having two nights to camp in one spot was really nice, as we could recover from our heavy peddling and enjoy an afternoon at the Oxbow River without worrying about the time.

We even slept in by a kazillion minutes!

We had a blast and that’s what matters!

The last day, we loaded up and headed out, looking forward (NOT) to the massive hill we had to go up to get out of the river valley. It was so steep that when we went down it, Seth was afraid he would blow a tube from the friction of his brake pads. For those of you who have never ridden a cargo bike fully loaded with children and enough camping gear for 4 people, down a hill, let me tell you it can be very scary as the bikes pick up a tremendous amount of speed! We were safe though, as our bikes made it through like champs.

Anyway, back to that hill! It was big! Something like 600 feet elevation climb in less than a mile. About 50 feet into it Seth and I got off our bikes and pushed them. We had sweat dripping down our backs and arms, palms got slick on the handle bars, and we made wonderful time, getting to the top in 1 hour.  Now, 1 mile per hour is NOT making good time I know, but it was a HUGELY STEEP HILL!!!! At the top we cheered, sweaty high-fived and ate a couple granola bars.

That’s about the end of my story. The rest of the ride home was uneventful except that we made a small detour at the end to enjoy some of Little Big Burger’s fries and lettuce wraps. Seriously, they are amazing and a treat after sweating in the sun for 3 hours!

An adventuresome girl, who happened to fall in love. Now a wife, mother, car-free and granola making hippy. View all posts by Chelle Burke

You arrived late, but I’ve got you covered! Check out older posts here.