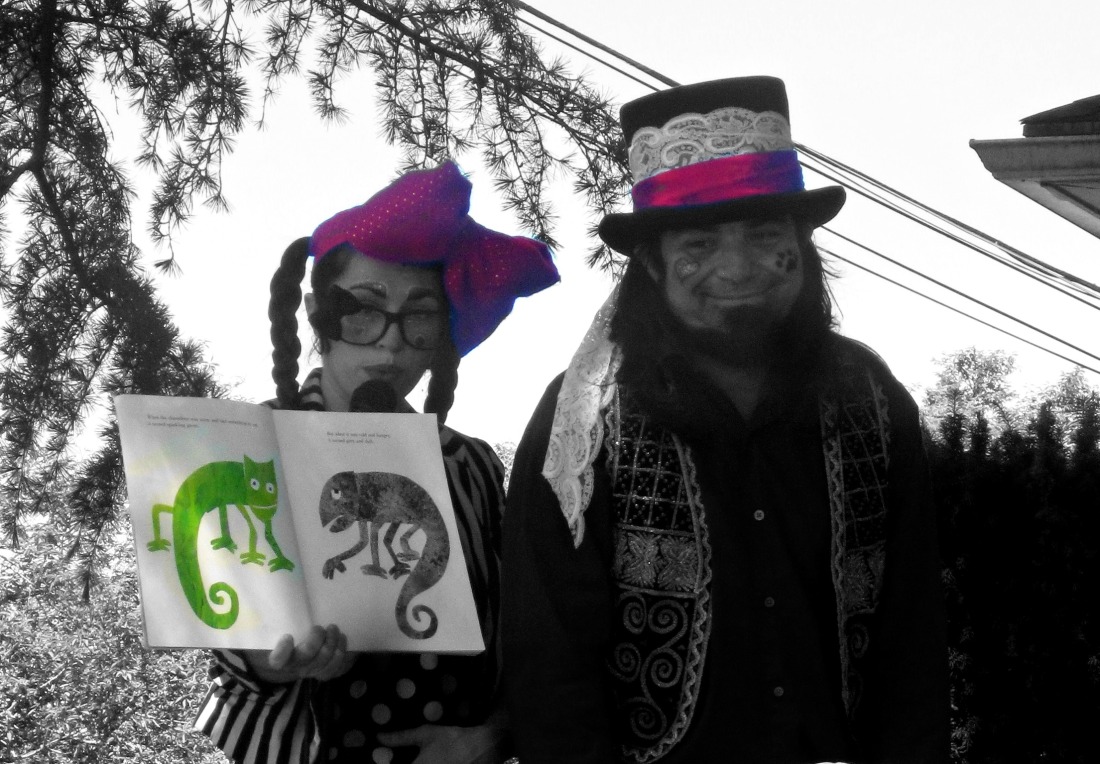 We were quietly watching the neighbourhood folks work and play along the street, some painting the compass rose in the middle of the intersection, while others sat on lawns snacking and catching up on gossip. Then the clowns showed up.

I had finished face painting some designs on a couple children and was just started to pack up, so had Marin watching Elita for me. When she saw the clowns, she turned to sit facing away from them, begging me to go home. I refused. When the paints were safely packed away, I sat beside her, holding Elita and comforting Marin, refusing to take the girls home until we had at least seen some of the performance. For the first 5+ minutes Marin would barely look at me, and wouldn’t even venture to sneak a peak at the clowns.

Seth met our SE PDX clowns, Olive and Dingo about a year ago with Marin, who (at the age of 1 1/2 years) did not take to many people in general let alone someone with face paint and crazy hats! The whole summer Marin and Seth had casual encounters with them, but never once did they crack a smile out of her.

This year though? It’s gonna be different! Marin is now 2 1/2, and after those first 5 minutes of her not even looking at them, she slowly turned just so she could keep an eye on them. Then her curiosity got the better of her and she sat, facing the “stage”, watching intensely and keeping one hand over her mouth as she always does when she is nervous. By the very end though, she was brave enough to talk to Olive, giving her a smile even! And when Dingo came over with a cupcake to get his picture taken with her and her half eaten one, she actually stood beside him and mimicked him, holding her cupcake out. I think it helped that they gave her a pink balloon dog.

These amazing people, Olive Rootbeer and Dingo Dizmal, ride around town on tall bikes, performing for the comunity almost every day, making kids (both big and small) smile and laugh, being what clowns everywhere should be. Good, honest, cheerful people who are lucky to make so many others happy.

You arrived late, but I’ve got you covered! Check out older posts here.